Studies in Humanities is a shared show between myself and three other choreographers: Hanna Satterlee, Marly Spieser-Schnieder, Isadora Snapp and Avi Waring. We have come together to produce an evening of dance, with excerpts from all new works. All four of us also dance in at least one piece that is not their own, making this a truly special show that highlights just how connected we all are - as artists and humans.

Hanna Satterlee grew up in East Montpelier, Vermont. She attended Goucher College in Maryland to achieve a double BA in Dance and Psychology/Dance Therapy, and has spent many years traveling throughout the US and in Ghana and Brazil, to intensively study dance and movement. She has produced her own choreographic and dance instillation work, and has performed with professional companies in Baltimore, NYC, San Francisco and throughout the state of Vermont- including projects with Double Vision (Sean Clute/Pauline Jennings) and BIG APE (Tiffany Rhynard), as well as contributing to the choreography and performing in Hannah Dennison's latest work, "Dear Pina." She returned to VT in 2010 to become the Director of Professional Programming, as well as the Artistic Director of the Teen Jazz company, at the Contemporary Dance and Fitness Studio, and joined Montpelier Movement Collective as a dancer and choreographer in May 2012 for the commission of a new dance work. She is currently directing a new evening-length dance-based interdisciplinary performance, titled ANIMAL, (see UPCOMING EVENTS for more information) and is please to be sharing two excerpts in Studies in Humanities.

Marly Spieser-Schneider graduated from the University of Michigan in 2009 with a BFA in dance. During her time at the Univeristy she was lucky enough to work with and be inspired by artists such as Rennie Harris and Laura Dean as well as dance department faculty such as Amy Chavasse, Robin Wilson, Jessica Fogel, and Peter Sparling. After graduating she traveled around Michigan teaching, performing, and producing work. This wandering expanded in range and after a few months of dancing around the USA she finally made her way to Vermont. Since being here she has had the great pleasure of working with many a talented dance artist. She is ever so grateful that Tiffany Rhynard welcomed her into BigAPE (Big Action Performance Ensemble) and gave her a one-of-a-kind introduction to the Vermont community. Since then she has been a part of Hannah Dennison's production of Dear Pina and performed in works by Paul Besaw, Clare Byrne, Hanna Satterlee, Toby McNutt, and others.

Marly’s dance project uses precise, rehearsed material that will be manipulated by chance interactions between dancers, the individual, and the space. Her intrigue lies in the innate, functional movements that define us as human as well as the many varied physical skills we are able to practice and hone; the body’s ability to recall and replicate as well as maneuver and improvise.

Avi Waring's life has been built around movement and comedy from an early age. She began dancing as a child at the Wolcott Children's Ballet, and then attended Walnut Hill School for the Arts, Tulane University and Zendik Communal Arts. At Zendik, Avi began her study of the art of improvisation, and she performed sketch comedy on the streets of Ashevulle, NC.

More recently, Avi's movement journey brought her back to Vermont where, she co-founded and directed Ballet Wolcott, a community based dance school, and co-founded the Montpelier MovementCollective with the mission to bring original professional level modern dance works to central Vermont audiences. As a freelance dancer, Avi has deeply enjoyed working with many acclaimed choreographers around VT. From 2010-2012, she performed original stand-up comedy across Vermont. Avi's most recent work is supported by a grant from the Vermont Arts Council. For Studies in Humanities her piece explores play, dressing up and character development within improvised performance structures. 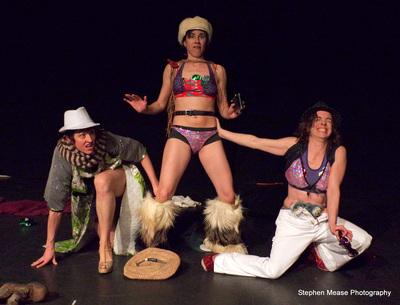 Avi Waring with dancers at Puppets in Education Show. photo by 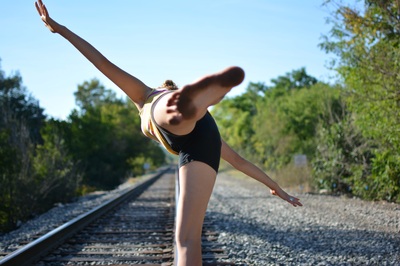 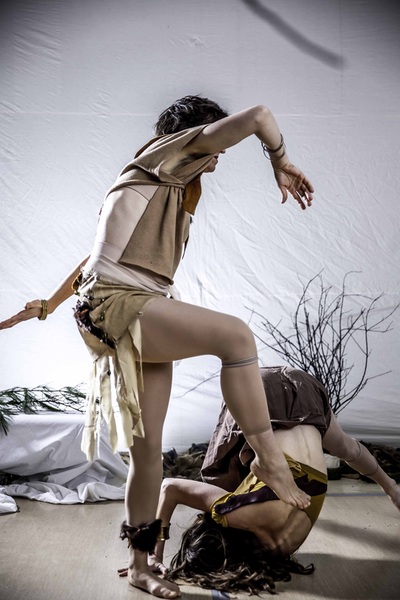